In late April 2014 I was having a beer in my local discussing the latest arrangements for our villages planned commemorations for the 100th anniversary of the start of World War 1 with my friend Charles. He asked what my plans were over the May Day Bank holiday weekend, and I said that Vanessa and I were due to go down to Chichester for The Italy Star Association AGM and Reunion weekend.

His father like mine had fought in the 2nd World War. Unlike my father who was in the army Charles’s father was a Navy man. Talking about the Navel bombardment of the Anzio beech head area he explained how his father’s ship HMS Spartan was struck and sunk by a German glider bomb, and he then went on to ask me to try and find out if anybody at the reunion knew anything about HMS Spartan as he was trying to piece together that period of his father’s war service history.

So during the open section of the AGM I asked if anyone knew anything about the incident. Shortly afterwards, Barbara Vanner came to speak to me with a copy of her book about her life. During the Italian Campaign she had been a part of ENSA and then went on to tell me that HMS Spartan was hit on Saturday and survivors were transferred to ships in Naples. Barbara and her friend had been out for a walk on the Sunday (as it was not a show day) and when they returned to their accommodation found that they had been called in to put on an extra show for the lads who had been picked up from HMS Spartan. After a few moments, their truck was back to pick Barbara and her friend up and take them down to the harbour to join the rest of the ENSA crew. After the show most of the girls had given the survivors small personal items and in Barbara’s case she gave away her charm bracelet and the charms from it. It was a small item she had bought shortly after landing in Italy. This is all detailed in her book, so I took a couple of photos of the pages and sent them on my phone to Charles, who was amazed at the new information. 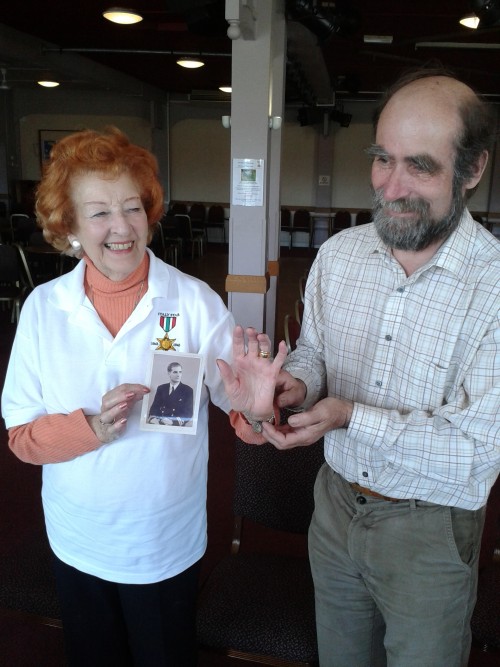 On the Sunday morning I received an email from Charles with a picture of his father and some of the items that his father had kept from this period. There was, surrounding the photo of his father, a number of small charms and a bracelet. When I showed the email to Barbara she was in no doubt that it was the bracelet that she had given away to a Spartan survivor back in 1944. Over the past year Wally and I have been in contact trying to find some free space in our diary’s to arrange a meeting with Charles and Barbara. So Charles travelled down to the 2015 reunion on the Saturday afternoon where at last he was able to meet Barbara and reunite her with the bracelet she last saw in January 1944.