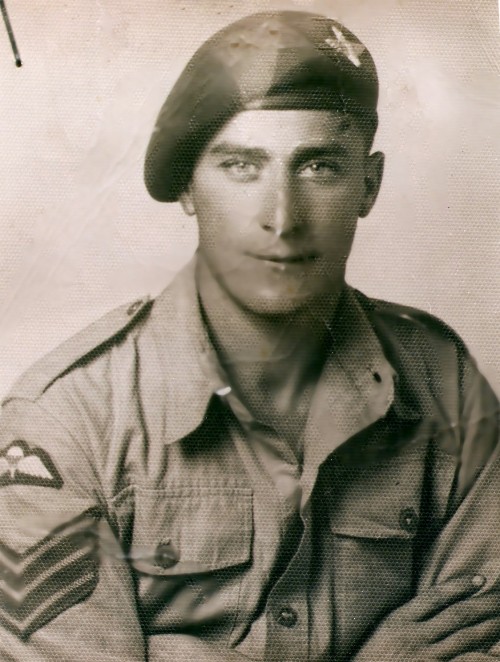 Giving a false age to enlist John joined the 7th Battalion Royal Welsh Fusiliers Territorial Army at the age of 15, serving a full two years as a Territorial Soldier (1932-1933) before enlisting in the regular army and began his recruit training at the Royal Welsh Fusiliers Depot in Wrexhan on 17th January 1934.
Between 1934 and 1939 he served with the 1st Battalion at Wrexham,Tidworth, Woking and Blackdown including a six-month tour with the Army Fire Service. Between 1939 -1942 he was a Sergeant Instructor with the 12th Army Training Group at Brecon and Wrexham. During 1942 he volunteered for Airborne Forces and was posted to the 10th Battalion Royal Welsh Fusiliers which was converting to a Parachute Battalion.
After hard training at the Airborne Forces depot at Hardwich Hall Chesterfield he was sent to RAF Ringway for parachute training winning his parachute wings after 3 balloon drops and 5 aircraft drops including 1-night drop in July 1942 on course number 21.
On 17th April 1943 the 6th Parachute Battalion the Parachute Regiment now part of the 2nd Parachute Brigade (4th,5th, and 6th Battalions) sailed from Scotland and arrived in North Africa on 23rd April 1943 landing at Oran North Africa, the campaign in North Africa ended on 13th May 1943From May the Battalion trained hard for the airborne invasion of Sicily (July 1943) but as the paratroopers boarded the aircraft the operation for them was cancelled.
September 1943 the 6th Battalion took part in the invasion of Italy, but as he tried to board HMS Abdiel he was told that the ship was full and too try another ship which is thought to be HMS Bosie. Sadly, the 6th (Royal Welsh) The Parachute Regiment had many casualties when HMS Abdis was blown in half by a mine on 10th September 1943, 58 of the Battalion were killed and 154 wounded at Taranto out of 520 men.
The 6th (Royal Welsh) Parachute Battalion saw action chasing the retreating Germans in late September 1943 but then pulled back to Taranto until 2nd December 1943.
On 2nd December 1943 as part of 6 Para he went back into the line as part of the 2nd New Zealand Division moving up the East Coast in ice cold winds and heavy rain into the Sangro Valley. From December 1943 to May 1944 they were in constant action in Italy including Monte Casino as part of the 2nd Independent Parachute Brigade Group.
August 15th 1944 saw the 2nd Independent Parachute Brigade Group (4th, 5th, & 6th Parachute Battalions) as part of the United Stated 1st Airborne Task Force. Jumping into southern France where they stayed until 26th August 1944, they then sailed back to Italy landing in Naples on 28th August 1944, the fighting in southern France had been light.

By January 1944 Nat Edwards had left 7th Platoon A Company for H. Q Company and then B Company.On 14th October 1944 they flew from Italy into Greece, jumping into high winds which caused many casualties. Once again they were chasing the German rear-guard. Returning to Athens 0n 7th December c1944 the 2nd Independent Parachute Brigade found themselves involved in four weeks of vicious street fighting in Athens against the E.L.A.S communist forces. The 6th Battalion suffered 130 casualties out of just over 500 men in those four weeks. The 6th (Royal Welsh) Parachute Battalion returned to Italy by sea during February 1945 which weather wise was a very rough crossing.
After a short rest Nat Edwards and his comrades were back in training for further Airborne operations in the north of Italy. They drew their parachutes five times, and five times they boarded the aircraft and just as they were about to take off each time the operation was cancelled. The war in Italy ended on 2nd May 1945.
In June 1945 Nat Edwards together with the rest of the 6th (Royal Welsh) Parachute Battalion sailed for Liverpool arriving on 25th June 1945. Welcomed home by pouring rain Nat Edwards was at last back home after service in North Africa, Italy, Southern France and Greece. He was discharged from the Army on 17th February 1946 and placed on the 2nd Reserve.