The 75th Anniversary of the Salerno Landings by Peter Emery

The 75th Anniversary of the Salerno Landings. 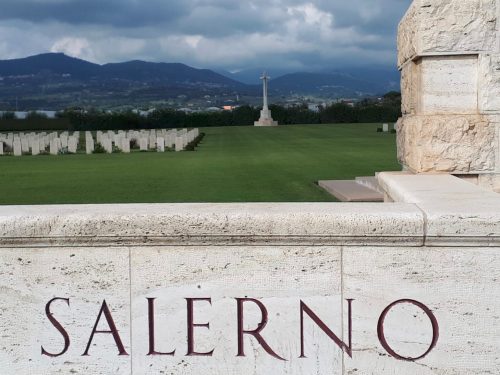 I was in the Salerno Area for two weeks on a family holiday initially and stayed on to organize a ceremony in the CWGC cemetery on 9th September which is now the Regimental Day of the Princess of Wales’s Royal Regiment (Queens and Royal Hampshire’s). This was a tribute to our two forebear regiments who were two of the assault Brigades at Salerno. I was joined by a group of Officers and men from the first Battalion based in Paterborn Germany.

Having explored the battlefield the week before I found the Memorial to the Hampshire Regiment at Uncle Green Beach and some locals said that the local community did commemorate the landings each year. Unable to find more information before the members of the regiment arrived in Italy I concentrated on arrangements for our British Ceremony at sunset on the 9th September at the Salerno Cemetery.

On the Friday while showing the group Hampshire Lane we noticed a local authority workman painting the wall behind the memorial plaque and although he spoke no English we discovered that something was going to happen the next morning. We arrived early on Saturday morning to discover that the Mayor and community of Pontecagnano-Faiano commemorate their liberators every year with a very moving tribute. First a wreath is dropped into the sea flanked by Police, Customs and Coast Guard boats then the Mayor moves across the road to Hampshire Lane memorial to lay a wreath to commemorate the 300 men of the 5th Hampshire’s who were killed, wounded or missing in the exit road during German counter attack on the morning of 9th September 1943. The mayor concludes the day’s events by moving to the CWGC Cemetery about 3 miles away to lay another wreath on behalf of his community. As an extra this year the Beach at Magazzeno was re-named “Hampshire Beach” as part of a regeneration programme including a small park in the beach front area. We were so touched that the Italians do not forget our forebears and they were equally touched that we were present too! 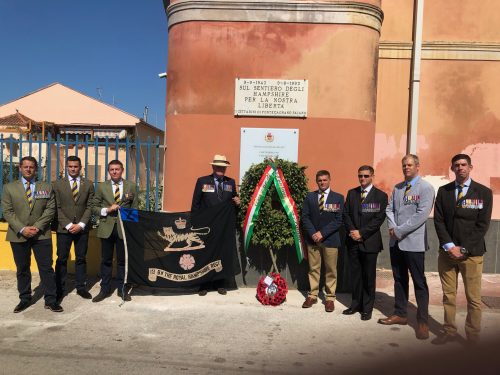 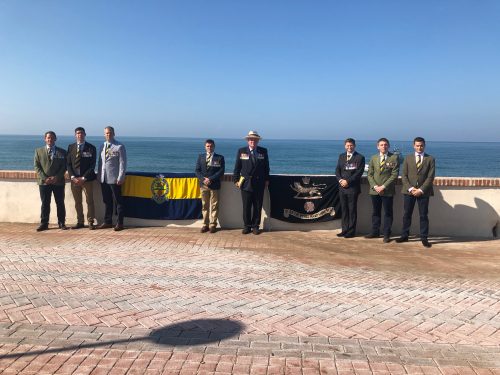 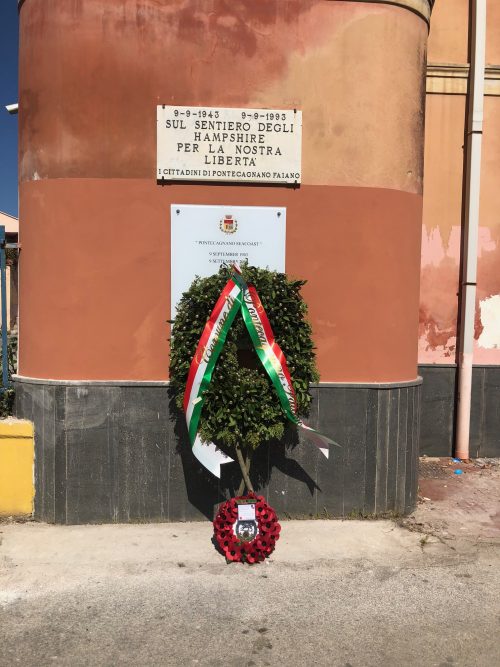 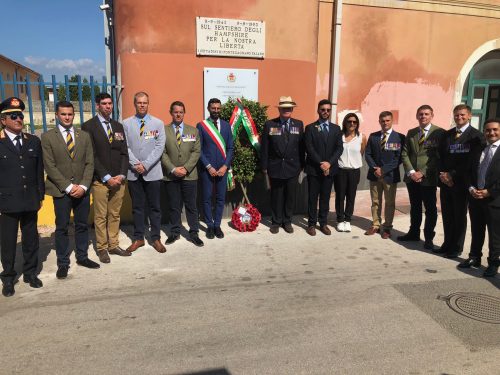 The ceremony was shown on local tv .

On the following day (Salerno Day) at Sunset my Regimental Group gathered at the CWGC Cemetery for our own act of remembrance . We were joined by about 20 officers and men and their families form the British contingent at the NATO HQ in Naples. Rev Jon Backhouse the vicar of Anglican Christ Church Naples and Chaplain to the British Contingent at JFC Naples led us in a moving act of remembrance. I had the honour of laying the first wreath on behalf of the Italy Star Association and there after wreaths were laid as follows from the many successor regiments and corps who took part in the landings. 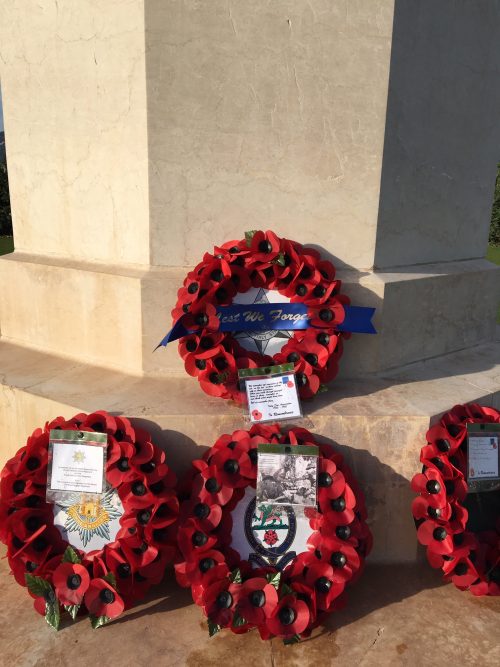 For men of the Highland Division who served as re-enforcements to units at Salerno and fought with distinction in the Italy campaign.
For our “brothers in arms” of the 36 Texas Inf Division , US Rangers, US VI Corps and USN and USAAF.
To the men woman and children of Pontecagnano , Salerno and Battipaglia who gave their lives and shared in our suffering. 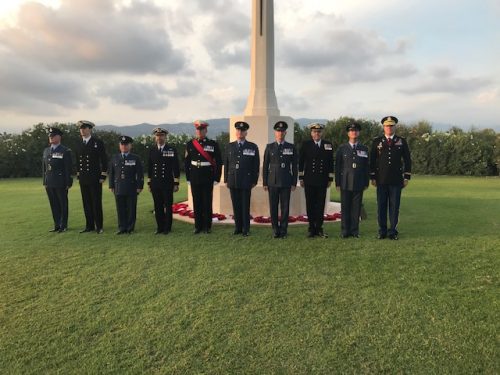 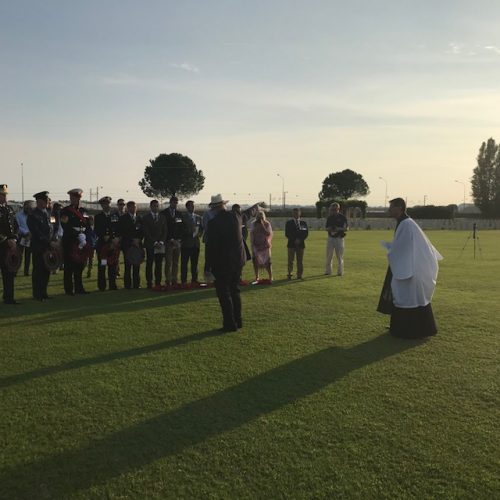 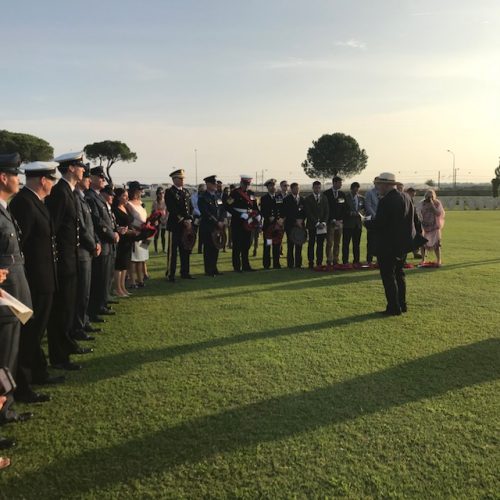 After the ceremony a separate tribute was placed on the grave of the 6th Duke of Wellington (2 Army Commando ) on behalf of his cousin the current 9th Duke. 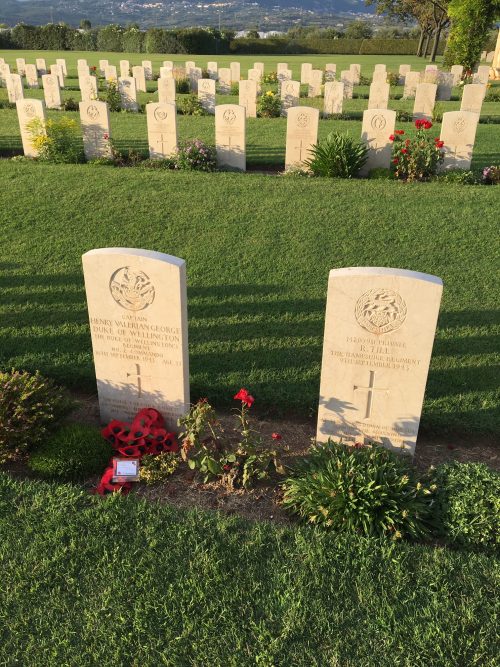 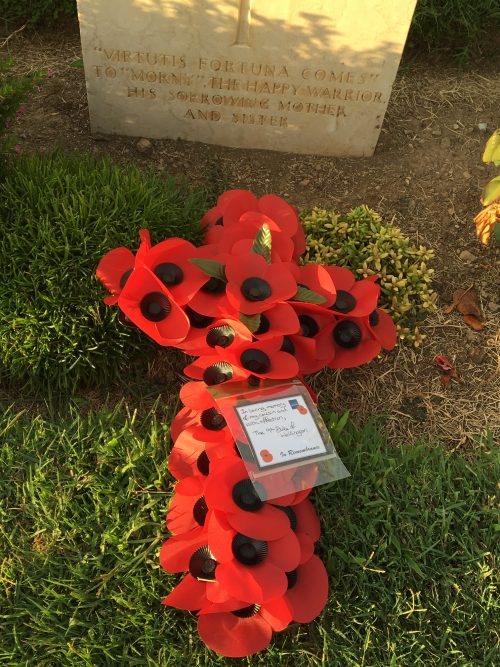 Note. Many British soldiers visited the Anglican Christ Church during Oct 43 after liberation of Naples, they have a small side chapel dedicated to the British regiments who passed through the church which is worth a visit. 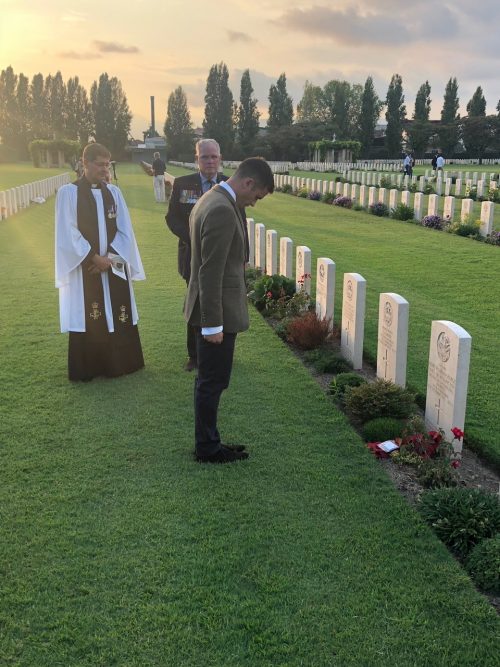 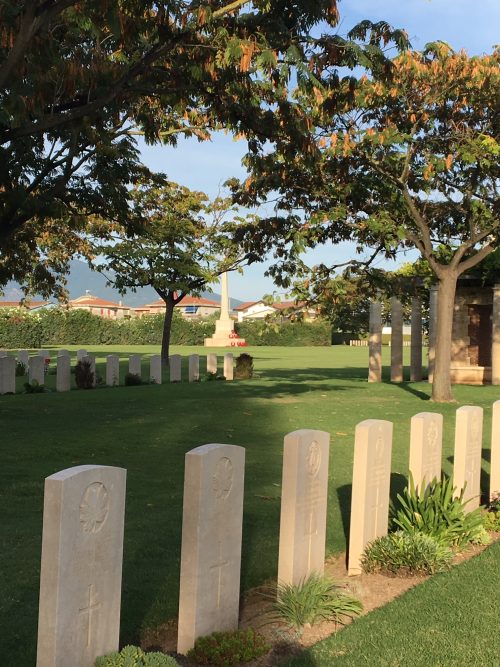 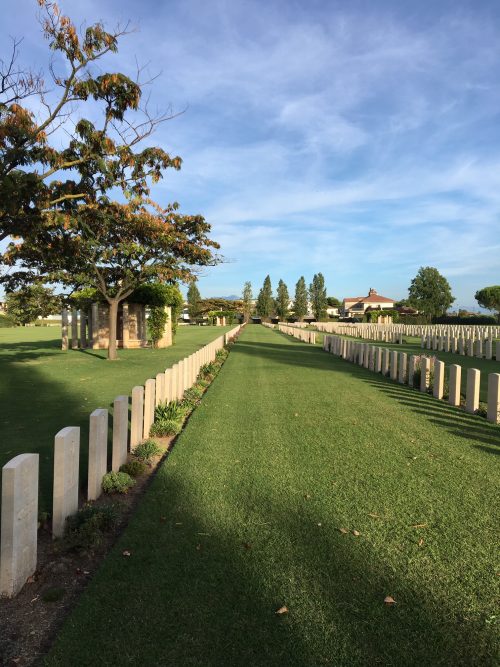 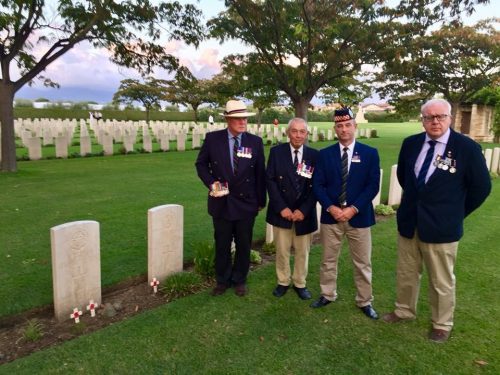 Editor’s Note: I had been contact by Peter Emery in mid-August regarding his plans to commemorate the Salerno Landings. Peter offered to lay a wreath on behalf of the Italy Star Association as we had not planned anything to mark the anniversary at Salerno. A wreath was sent to him via the NATO HQ in Naples, the Associations exhortation was on the card attached to the wreath.
Robin Hollamby National Vice-Chairman and Magazine Editor