Johan Van Oldenbarnevelt
Article submitted by our Member Roy QUINTON
In early February of 1943 I was a signals and despatch rider man in 406th Battery of the 102nd Field (later Medium, in Italy) Regiment RA. The Regiment sailed to Algiers, used as a staging point for our journey into Tunisia, to take part in the Tunisian Campaign, at the end of which, the War in North Africa came to an end with the surrender of the Axis forces on the 13th May 1943, at Cap Bon. The vessel we sailed on was the Netherland’s ship Johan Van Oldenbarnevelt, a pre-war Liner which had shuttled between Rotterdam and the Dutch East Indies and which had been converted as a troop carrier. It must have been a beautiful vessel before WW2 and, notwithstanding that the very fine 2nd class Saloon had been stripped of all its finery, so that hundreds of Hammocks could be slung from its ornate ceiling, the feeling of opulence somehow persisted.
I attach some photographs of the ship, taken in 1959, after it had been once more converted to regular civilian use. I remember how awful it was for us at night to negotiate the distance between the hammock area and the toilet area: -so many of us (myself included) were so persistently sea-sick (no ship stabilisers fixed in those days) that, at night, we were deprived of proper control of our functions, the state of the flooring being such that it became almost impossible, in the semi-darkness, for us not to slip and fall down, with the obvious consequences thereof. The food, which the Dutch crew prepared for us, was absolutely wonderful. Yet I don’t think I kept one meal completely down during the whole of the 11 days’ voyage, (all that time because, so we were subsequently told) the Captain twice took the ship up and down the West coast of Spain, to do everything possible to elude enemy submarines.
I remember, too, that, for some unimaginable reason, some of us were ordered to do an odd guard duty in the corridors, at night and that, on mine, I was fascinated by the Indonesian servants who padded up and down on errands performed on behalf of the Captain and his crew. At one point I stopped one of them and, with a smile, pointed to the map hanging on the wall, of the Dutch East Indies and, by pointing at it and, afterwards, at the servant himself, managed to ask him from which town he hailed; – with a friendly grin he pointed at the town of Surbaija. At this point a Dutch ship’s Officer passed by and, in excellent English, admonished me for speaking with the servant! ! “Fings aint” how they used to be, are they now? During the daytime, I stayed on top deck, near the gunnels, where the fresh air
helped to relieve me of the feeling of sickness, and where I felt I would be out of everybody else’s way. When the “gong” sounded, feeling an appetite, I would go down to the mess room for some food but, there, the warm enclosed atmosphere would bring back, yet again, a strong feeling of nausea and I would leave most of the food ….. , which was, almost always, immediately consumed by one of the lads who were not affected by sea- sickness.
When we finally disembarked at Algiers I was as thin as a rake, but once on the dockside, was absolutely delighted with a hand-out of a tin of “bully” and some “hard tack”, all of which I ate ravenously. We were then marched to Algiers Race Course, then covered with hundreds of small tents, one of which I and a couple of pals appropriated for ourselves and where, on the paillasses provided, we threw ourselves down and slept the “sleep of Riley.”
After the war (obviously in 1963, from what follows) I was reading a newspaper, one evening, and came across a short report by a correspondent to the effect that the Dutch Liner, the “Johan Van Oldenbarnevelt”, had been completely destroyed by fire in Rotterdam harbour. This brought back all the
memories. However, I recently downloaded from the Internet an article about the matter, which, on the contrary, indicated that the ship had caught fire at sea, in 1963, and had sunk with the loss of 128 lives.

The Johan Van Oldenbarnevelt at sea, also shown are the 2nd Class Dining Saloon and the Main Stair Case 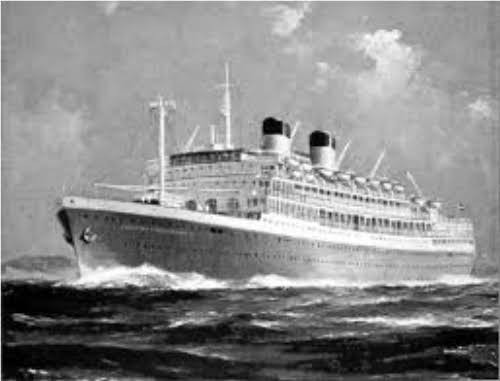 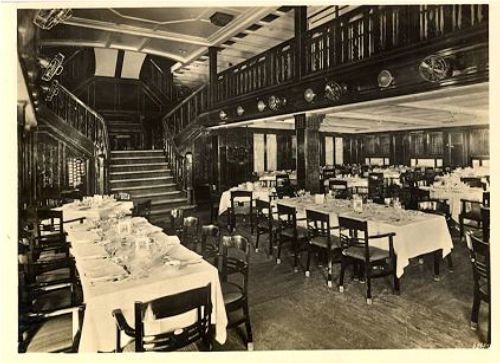 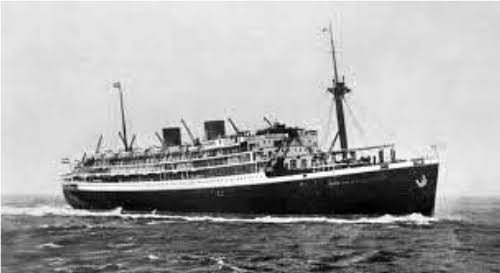 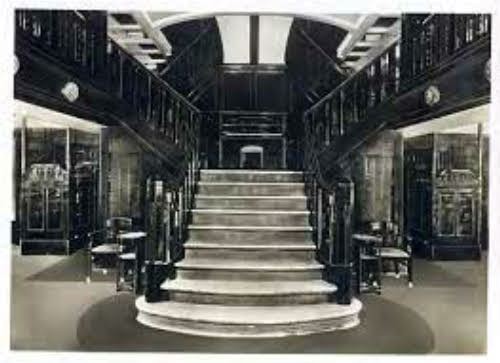