What ever the year there is always a significant anniversary and 2020 has been no different.

Last year saw the planned major celebrations of the 75th anniversaries of both VE-Day and VJ-Day  denied us by the Covid-19 virus. Many of you reading this took part in some way during those events in 1945. Those of us from the following  generations were looking forward to these planned events and the opportunity to catch up with you to hear your  wartime stories. We look forward to catching up with you this year.

But a 100th anniversary is something extra special, like the 100th birthdays celebrated by both Jack Andrew in March and Doug Weyhaupt on Armistice Day, sadly Doug passed away a few weeks later.

Britain is fortunate in having many charities who help and support current and ex service personnel. The two highest profile charities are the relatively new kid on the block ‘Help for Heroes’ and ‘The Royal British Legion’, the second oldest at 99 in 2020.

The Not Forgotten Association was founded in 1920 by the American Soprano singer Marta Cunningham CBE. Having moved to Europe in the early 1900’s she had devoted most of her time to charity work during WW1. On hearing that there was perhaps a handful of wounded soldiers undergoing treatment at a nearby Ministry of Pensions Hospital she approached the Matron and asked if she had a few lonely patients who might like to come out for tea. The Matron was somewhat taken aback but replied that she had 600 such patients!

Marta mobilised a group of her friends to host these young men for afternoon tea and entertainment. It was during one of these early invitations that one soldier was heard to say, “we don’t want no charity, Miss, we are the forgotten by everybody and we’d better stop so”. And so, it was that on the 12th August 1920 that The Not Forgotten was formed for the ‘comfort, cheer and entertainment’ of servicemen injured during the Great War. In its first year the charity entertained some 10,000 men – a number that they aim to maintain annually 100 years later.

Many of you, either as veterans or carers, will have over the years had the good fortune to attend events such as the Garden Party at Buckingham Palace or the Christmas Party at St James Palace. I had the good fortune to accompany a friend of mine to the Garden Party in the summer of 2019. It was a great afternoon being able to catch up with many veterans I know from the Royal Navy Association, the Royal Marines Association, and the ISA but was also sadly the last time I spoke to Bryan Woolnough, who was still able to produce his escape map of Italy from his pocket, much to the amazement and interest of those close by in the refreshment tent.

The NFA had their usual full programme of events planned for 2020. Many were going to be a little bit more special than usual as 2020 was their 100th birthday, but alas they, like us, had to cancel their events programme for the year. I received a letter from their Chief Executive, Brigadier James Stopford CBE, in September outlining their centenary project to send a gift to 5,000 WW2 veterans. So it was that I submitted a list of every WW2 veteran I knew, including my mother-in-law now 94, who had served in the Women’s Land Army.

In late November 43 of our veterans were amongst those sent a ‘Forgot You Not Box’ by the NFA, containing a number of useful items; a coaster, a coffee mug, a tea towel, some chocolate, a glass cleaning cloth, a copy of the Forgotten Gazette (well worth a read), a miniature bottle of port, a CD,  a commemorative coin, a war time recipe book, and  a card signed by The Princess Royal. I do hope the recipients found the gifts useful and saved the port to toast the Queen after their Christmas lunch. 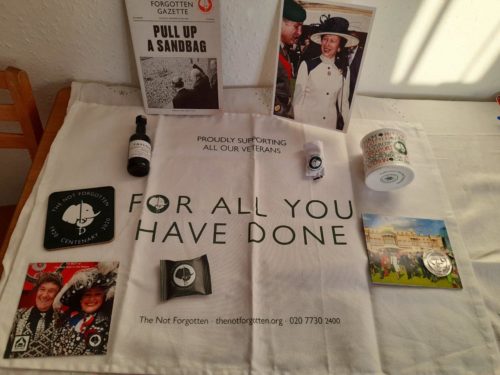 Over the last 10 years I have on occasion helped the NFA with some of their fundraising events, taken part in a battlefield tour to the D-Day landing beaches, and the 70th Anniversary commemorations at Cassino (working as part of the NFA’s support team).

With my contacts I have re-established the links between the NFA and the ISA  so that the Italian Campaign remains ‘Not Forgotten’.