Bob Tong 2 SAS, with no maritime skills to speak of, let alone a map, with only the instructions to keep the Italian coast to starboard, escaped sailing a boat down the Italian Adriatic coast in 1943. Just as he completed this maritime odyssey and entered Allied waters, an RAF plane strafed them. Luckily Bob survived to tell us the tale last September.

Robert Cecil Tong or Bob as he was known to us, served in 2 SAS during WW2. Sadly we only knew him for a short while; he had remained under the radar for over 50 years following his wartime service. He only joined the association in 1996 and attended his first function, the West Midlands Lunch in 2013 with Vic Sedgley (ex 22 and 23 SAS). 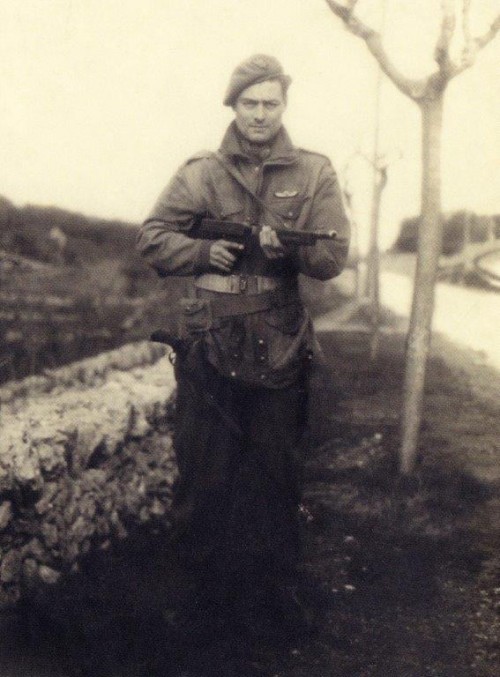 Bob was born in Clun Shropshire on the 1st July 1923. He won a local authority scholarship to
Adam’s Grammar School (Newport Grammar) in 1933. There he won prizes for both his academic and sporting achievements. He left at the age of 14 in 1937 to take an Electrical Engineering apprenticeship in the Midlands.

Before the war he taught himself the guitar and with his sister on the piano they played in a dance band. They cycled to and from dance halls, enjoying the dancing as much as being in the band.

After finishing his apprenticeship in 1941, he volunteered for army service, posted to what were called Young Soldier Battalions. These had been formed to train men too young for conscription (then 19) and prepare them for service overseas. They undertook vital UK home defence tasks, principally guarding aerodromes, freeing up older men for service in North Africa and Burma. On January 29th, 1942 Bob joined the 70th (Young Soldier) Battalion, Royal Warwickshire Regiment. According to a fellow veteran he and Bob were based in Brockenhurst, Hampshire guarding airstrips and the coast looking for enemy subs, agents landing or their worst nightmare a sky full of German Paratroopers. The unit was disbanded in 1943 in Exeter, with the men scattered to many regiments and campaigns. They formed an association in 1946 which Bob played an active part in. Planting commemorative trees in the National Arboretum, which were dug up by mistake, Bob oversaw the replanting of their replacements.

In 1943 Bob was sent to North Africa with the Royal Warwick’s to reinforce the 1st Parachute Brigade who had taken heavy casualties in the final stages of the Tunisian Campaign. By the time their ship steamed into North Africa, the Germans and Italians had surrendered there.

Having landed in North Africa in May 1943 Bob volunteered for the newly formed 2nd SAS and was trained at the Regiment’s camp at Philippeville on the Algerian coast. It is believed that he was deployed on Operation Narcissus that July, forty members of the Regiment being put ashore on Sicily to capture a lighthouse and the surrounding area. This was found to be deserted and therefore no threat to the Allied invasion fleet, the team was withdrawn to North Africa.

On 10 September five of its squadrons (‘A’, ‘B’, ‘C’, ‘D’ and the French Squadron) landed with the Airborne Division at Taranto Harbour. Although the landings were unopposed there was severe loss of life when HMS Abdiel, transporting the 6th Parachute Battalion, was sunk by mines.

Bob spoke to us of seeing bodies floating round the harbour for days.

‘B’ Squadron, of which Bob was a member, subsequently commandeered local vehicles, his patrol under Captain Peter Power moving west towards Calabria to link with the 1st Canadian Division that had landed on the toe of Italy on the 3rd.

Contact was made on the 17th and information exchanged before the patrol moved to Bari where ‘B’ and the French Squadron came under the command of IS9’s ‘A’ Force for Operation Jonquil.

Jonquil aimed to rescue escaped prisoners of war from behind the lines as far north as Ancona. The east coast was therefore divided into four areas of responsibility, Bob’s party of six under Power being tasked with that between Civitanova and San Benedetto. In the early hours of 7 October they, and another party, were put ashore near Grottemare, four miles from their intended landing point. Splitting up into small teams to look for ex-POWs an RV was set for the 22nd. Bob, Power and a US Army Interpreter formed one such syndicate. Moving north they rapidly located Allied servicemen who in turn brought in others. By the 20th they had returned to SSM Marshall’s rear party RV with approximately 40 men. However, the following day German troops arrived and in the ensuing fight two of the rear party was captured, unbeknown to Bob’s larger group that was laying-up some way off. Descending later that morning to take over sentry duties he ran into a German patrol that threw a grenade at him. He decided there was no point in hanging about and moving at speed managed to warn the others.

Having left their sick interpreter with a local family and located Marshall (who had done his best to rescue his two captured men) Power arranged a new embarkation date of the night 24-25th: on the 24th all Jonquil’s SAS parties arrived. In total they had collected an estimated 3-400 British, Yugoslav and American servicemen. However, as small groups crossed the road to the pick-up beach shots were heard, followed by the arrival of German patrols. The POWs subsequently scattered into the hills and with the SAS not confident of being able to concentrate them again amidst the heightened threat the majority of the team extracted on the 25th.

Bob and Power were left behind to amass stragglers, which they continued to do. However rations had long-since been exhausted and although they lived largely from the generosity of Italian peasants (kindness that Bob remained forever grateful of) their health began to suffer. The weather had been consistently unkind and the pair, who had become close through shared experience, now decided to use a local vessel to return to their own lines. As Power later wrote: “these were invariably promised for ‘tomorrow’”, and in the end they decided to march to the coast and steal a sailing boat. After further adventure they and twenty-two ex-POWs set sail from San Benedetto on the evening of the 19th in two vessels organised by a local man, although they had to force one member of the crew to board at pistol point. Having narrowly avoided being shot-up by Spitfires they arrived at Termoli 220kms further south, the following day.

Bob remained proud of what he and Peter Power had achieved on Jonquil and was very grateful for photos sent him last year of his former friend, and for the post-operation report that he had never seen. His eyes, forever mischievous, lit up on seeing their story in print and grew even brighter on finding that it is available for all to see at The National Archives.

Bob returned to the UK with 2nd SAS in March 1944 but was one of those that strongly disagreed with the newly formed SAS Brigade coming under command of Airborne Forces.
Given the choice of returning to their parent units, Bob chose to do just that, remaining in the UK. He was posted to the 9th Battalion Beds and Herts Regiment for the remainder of the war. Although he later expressed regret over his decision it was probably one that saved his life, many of his former squadron comrades being murdered after capture on Operation Loyton later that year.

Whilst serving in Winchester Bob met his wife Ruth at a dance, they married in February 1945. On a recent visit to St John’s Church with his niece Kim, Bob was able to recall the service minute by minute 70 years later. In 1946 and Ruth were joined by a son Rodney. Rodney was born with Down’s syndrome.

After his discharge Bob returned to the Midlands with his family and went back into electrical engineering, going on to build a successful business, which he later sold. Rodney was to shape their lives as he and his wife devoted themselves to his upbringing. Holidays were in a caravan regularly touring sometimes as far as Italy to see his old wartime stomping ground. His interests were wide and varied, he became a Cordon Bleu trained cook and his photography reached standards of excellence required to become an Associate of The Royal Photographic Society.

With the death of his son Rodney in 2002 and wife Ruth in 2012, Bob finally felt able to
rejoin his old wartime SAS comrades and Italy Star Veterans’ on trips.

In 2013 he went with the Italy Star Association or the ‘D Day Dodgers’ and they had been labeled, on their 70th Anniversary trip to Italy. Bob like all Italy veterans had little truck with this title as it did not reflect the reality their 2 year campaign up through Italy enduing great danger, hardship and a very high casualty rate against well fortified German defence lines including the bloody Battles of Anzio and Monte Casino. Two years of long hot summers and cold, muddy, snow filled winters slogging up through Italy did not help either.

In September 2014 Bob joined us for the SAS Association 70th Anniversary trip to France, his thoughtfulness, great kindness and remarkable stamina for man in his 91st year, was respected by all on the trip. Bob’s final SAS appearance was at the unveiling of the LRDG memorial in Scotland in October 2014. It was with great sadness that we learnt of his untimely death only a few days later.

We gathered in November in Wolverhampton for his funeral service and heard his niece Kim speak movingly of a man proud of his wartime service, a devoted family man and ‘someone who people looked up to’. None of us could dispute those well chosen words. Afterwards we drank and shared stories with his old comrades of the Wolverhampton Branch of the Parachute Regiment Association, where Bob had spent many happy hours with in his last few years.
Research by Dick Merry, Wes R, with thanks to Kim Byatt (Bobs niece), Vic Sedgely , Adams Grammar School and The Italy Star Association 1943-1945.