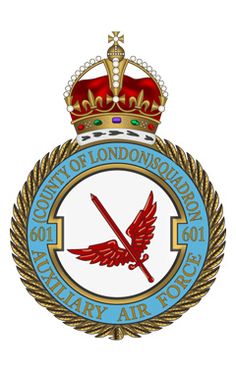 During the lockdown summer of 2020 I was contacted by Kate Teacher whose family are the owners of a large farming estate near where I live. The Hadlow Estate (formally Somerhill Estate) has been farmed by Kates husband’s family   for over 170 years.

Kate has a keen interest in the history of the estate and the people who live and work on it. Kate and her husband Harry were supportive of a project the I was involved with remembering the 34 men from the parish who fell during the Great War. I began the work planning how those events would be remembered during 2013, this led to the publication of my first book in 2019. The book looked at the lives of these young men in the parish where they lived and worked before, they went off to war. We remembered each one of them with a short act of remembrance on the 100th anniversary of the day that they died. Being a rural farming parish many of these men worked directly for the estate, lived in estate properties of worked for some of the estates tenant farmers.

The email from Kate asked if I could help find anything about the Messerschmitt that crashed in flames in a field on one of the estate farms not far from where I now live, and if I was happy to work with their website team to put something together to mark the anniversary of the Battle of Britain. At the time I had already started work on my second book which looks at the lives of those in the parish who were killed in WW2, so I was more than happy to be onboard with this project.

With the web site team, Kate, and myself all searching the internet for clues as to what had happened. I managed to find a picture of the remains of the aircraft and soon turned a black and white original into a colourised picture, while Kate had miraculously managed to find the details of both pilots and what happened on 6th September 1940 in the skies above Tonbridge. While I followed up with more details about their squadrons and where they had flown from.

The German pilot Fw Eric Braun was captured after he bailed out over Tonbridge and spent the remainder of the war as a Prisoner of War. Fw Eric Braun had flown with Jagdeschwader 27 (JG27 fighter wing) 3 Gruppen (group) part of the Luftwaffe. The Messerschmitt 109E Black 6 pictured below may have been the one flown by Fw Eric Braun or its replacement. 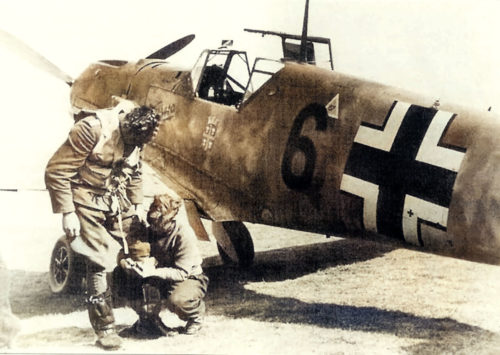 While F/L Michael L Robinson the pilot of the Mk1 Hurricane flew with 601 Squadron RAF who at the time were flying from RAF Tangmere. F/L Robinson was promoted to Flight Commander in August 1940. He was appointed Wing Commander of the Tangmere Wing on 1st January 1942, sadly he failed to return from a patrol over the English Chanel in April 1942. Wing Commander Robinson had been awarded the DFC, the DSO, and the Croix de Guerre (Belgium). He is remembered on the Runneymede Memorial. 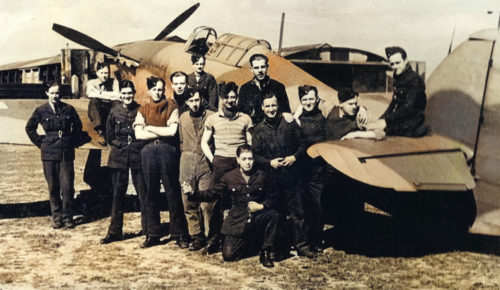 Above: Ground crew gather round a Mk1 Hurricane at RAF Tangmere in 1940 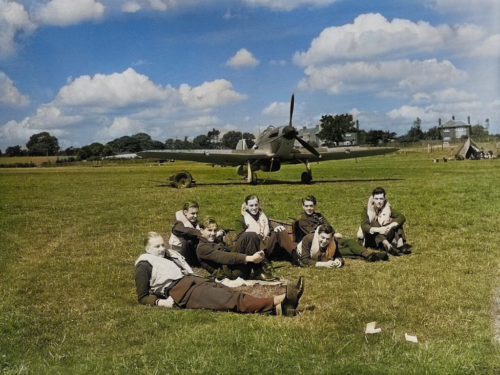 Above: Pilots relax awaiting to be ‘Scrambled to intercept’ enjoy the summers day on a Kent airfield. 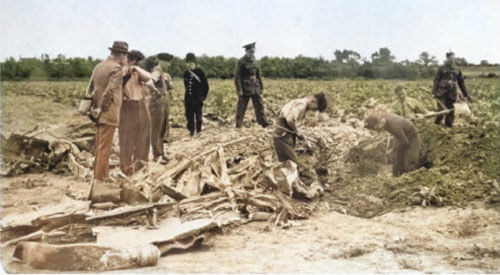 Above: The remains of the wreckage of the Messerschmitt Bf 109 – 4 in a field at Bank Farm Tudeley.

All interesting you might say but how is this connected to the Italy Star Association. Well, the incident and the two pilots are not, but I wanted to know what happened to 601 Squadron and to see where they went during the remainder of the war.

601 (County of London) Squadron had been formed at RAF Northolt on 14th October 1925 when a group of wealthy young men, all of whom were amateur aviators, decided to form themselves into a Reserve Squadron of the RAF they became known as the ‘Millionaire’s Squadron’ because their first commanding officer Lord Edward Grosvenor, decided that he would only recruit members of White’s Club in London. Not only did most of the pilots own their own private aircraft but they also drove expensive fast cars. They showed little regard for the rigid discipline of the regular service, this obviously changed over the following years. The Squadron became a day fighter unit in 1940 and operated both the Hawker Hurricane and the Supermarine Spitfire. Aircrew attrition and transfers to other units during the early part of the second world war took its toll on the pre-war personnel, replacements were drawn in from all walks of life and all parts of the Commonwealth and the Squadron became as cosmopolitan as any squadron in the RAF. 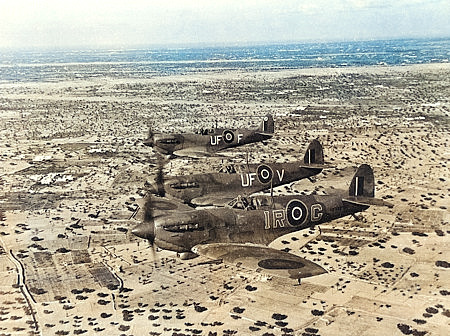 The spring of 1942 saw the Squadron on its way to Egypt via RAF Luqa Malta where they spent two months. With postings to several bases in Egypt they eventually arrived in Libya in November 1942. They were again moved around as operational needs required but in February 1943, they found themselves at Hazbub Main in Tunisia. Between the 15th June and the 13th July 1943, they were back in RAF Luqa, Malta. It was from here that 601 Squadron flew in support of Operation Huskey moving into their new base at Pachino Sicily on 13th July 1943 before a 7 day stay at Cassibili then onto Lentini until 5th October.

Following the successful landings in mainland Italy during September 1943 601 continued to provide aircover support for land and sea operation around southern Italy. They found themselves based in Tortorella (5th to 18th October), Triolo (18th October to 26th November), Canne (26th October 1943 to 18th January 1944). In response to the successful landings and operations in southern Italy 601 Squadron like many other Squadrons were continually on the move shadowing the advancing troops on the ground sometimes with only a few days between moving from one airstrip to another.

The table below gives the movement dates and airstrips used by 601 Squadron in Italy between mid January 1944 and 14th August 1945 when 601 Squadron was disbanded.

On 10th May 1946, the Squadron was reformed as a fighter squadron within the Royal Auxiliary Air Force based at RAF Hendon until 28th March 1949 when they were sent to RAF North Weald. During this period, they were initially equipped with Spitfires followed by the jet powered De Havilland Vampire prior to upgrading to the twin-jet powered Gloster Meteor. The squadron disbanded along with all other Royal Auxiliary Air Force units during the defence cuts of early 1957.

The Squadron is still active today after reforming on 20 April 2017 at RAF Northolt, 601 Squadron is now a Specialist Support Squadron of the RAuxAF. The 3 principal roles of the Squadron are to provide advice to the Chief of the Air Staff and the RAF to help address important issues; to provide access to new networks that the RAF has not traditionally been connected with; and to develop advocates for the RAF. ​

601 Squadrons Battle Honours (those marked with an asterisk are emblazoned on the Squadron standard) are:

But what of the German fighter wing, JG27. By the second half of 1940 JG27 consisted of 3 Gruppen (groups) which fought in the Battle of Britain. In 1941 they fought in the German invasion of Yugoslavia and Greece. The wing then separated with 2 Gruppe being sent to the Russian Front while 1 Gruppe were sent to Libya where they were joined by 2 Gruppe just two weeks later. Later in 1941 3 Gruppe were sent to join them and JG 27 fought as a complete wing in Africa and the Battle of the Mediterranean until the end of 1941 when 1 Gruppe returned to France while 3 Gruppe and the newly formed 4 Gruppe continued operations in Yugoslavia and Greece until March 1944.

One of the most noteworthy successes of JG27 was the downing of a Bristol Bombay transport aircraft which was carrying the newly appointed Lieutenant General William Gott. He was killed in the incident on the day he had been appointed by Winston Churchill to lead the 8th Army in North Africa. William Gott was replaced by Bernard Montgomery.

On the 8th of October 1942 1 Gruppe were stationed in Pachino, Sicily supporting the air attacks on the island of Malta. 1 Gruppe relocated back to Europe while 2 and 3 Gruppen remained in Sicily until late June 1943 when they moved to Italy. All the Gruppen of JG27 ultimately were back in central Europe by the end 1944. 1 & 2 Gruppen moved closer to Berlin in mid April 1945, 2 Gruppe surrendering at Leck on 8th May 1945 and 1 Gruppe surrendering at Salzburg the same day.  3 Gruppe having moved to Saalbach, also surrendered on 8th May,, while 4 Gruppe had been disbanded in late March 1945.

No doubt the dog fights between The Millionairs Squadron (601 County of London Squadron RAuxAF) and JG27 continued in the sky’s  over the deserts of North Africa, Sicily and on to Italy above the heads of many of you who were there during those hard days. 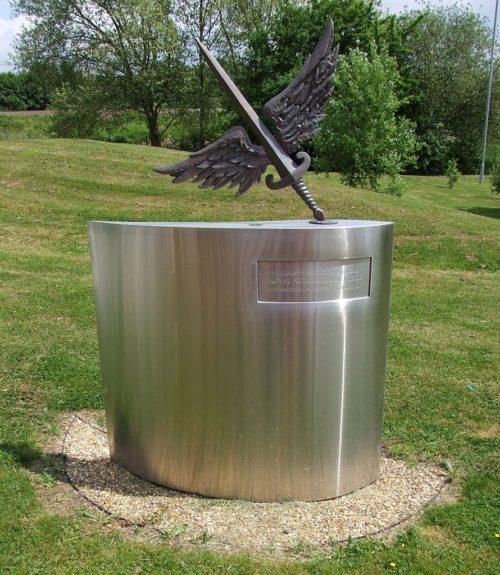