In the heat of England’s hottest July (apparently since George III was on the throne!), Grahame and I set off from Devon across country towards Kent. We arrived in Hythe where we had booked B & B accommodation, then met up with Suzanne Turk who had made the necessary bookings with the Royal Tank Regiment (RTR) (Medway branch) to enable the Italy Star Association and the Monte Cassino Society to share a plot with them during the event. 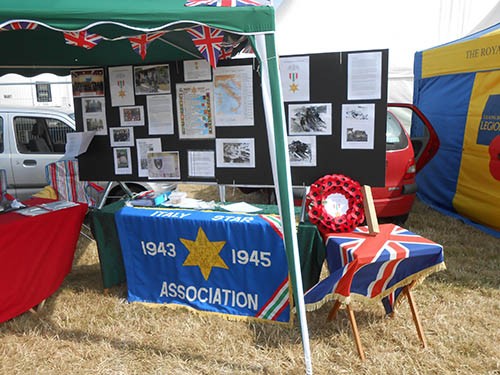 On Wednesday 17th at 6.30am the temperature was already touching 19 degrees and rising, with a heat haze over the English Channel, so we knew it was a day for shorts and our ISA t-shirts (as you will see in the photos). 2013 is the first year this event has been held on Folkestone racecourse so we weren’t too surprised at the chaos which met us as we tried to gain access to the showground with our cars. What we hadn’t been prepared for was the enormity of the event – 225 acres of ground with hardly a spare blade of grass not being used! During most of our time there we did not stray far from our stall, so it was not until exiting at the end of the first day that we realized how accurate was the event commentator’s claim that this is the biggest collection of military vehicles, weaponry and supporting personnel on the planet! There were WWII battle re-enactments, Great War trenches…everything!

After about half an hour of negotiation and waiting for various officials, we were finally allowed to drive to our allocated plot. On tucking our cars discreetly away, we began the task of erecting a gazebo which was to provide shade until the RTR caravan arrived later that day. All three of us were on a learning curve to get all the pieces in the right place and in the correct order – but we managed it, put up bunting, tables and dressed them with the ISA standard, tri-fold display boards filled with photos, articles and information to attract the attention of passers-by.

The first day of the show was given over to school parties so there were coach loads of youngsters passing us by, seemingly with no interest in our display (only that on their phone screens!). We battled strong breezes which played havoc with the display boards and carried the dust being created by tanks and army vehicles which were on display in the arena in front of our stall. During the day, there were a couple of meaningful enquiries and we handed out a number of business cards, which had all my contact details noted on them. Later in the day the RTR gentlemen arrived and we helped dismantle the gazebo, and install their caravan and awning (under which we were to have a place for the rest of the event). 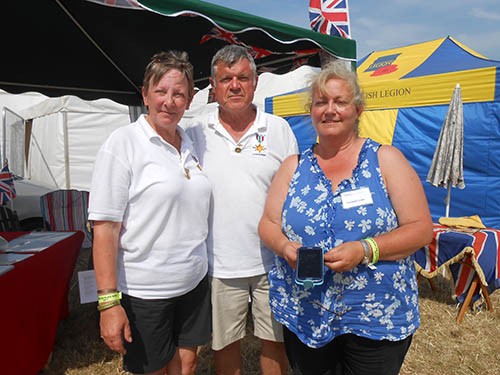 Thursday dawned another hot morning and so, prepared for desert conditions, we arrived for day two. From the start there was much more serious interest in our stand. Grahame, Suzanne and I were often all busy at the same time, chatting and explaining the Association background as well as listening to stories of children/grandchildren of veterans, also handing out business cards and membership forms. In fact one gentleman signed up and paid on the spot! He is the son of a veteran and lives in Italy so of course I mentioned Harry Shindler! We met John Dudley and Frank Bell, two Italy Star veterans, who were both delighted to see our stand and thanked us for doing our best to make people aware of the campaigns fought in Italy, and for reminding them that we are still an active Association, keeping the memories of the veterans to the front of our minds.

At the end of Thursday, Grahame and I had to head back to Devon due to family commitments, so we left the ISA stall in the capable hands of members Robin and Vanessa Hollamby, ably assisted by Suzanne. They informed me later that from Friday onwards, due to the huge amount of visitors, spare ground had to be acquired and a park and ride system put in place! Feedback continued to be very good and another ISA veteran spoke to Suzanne and complimented us on our 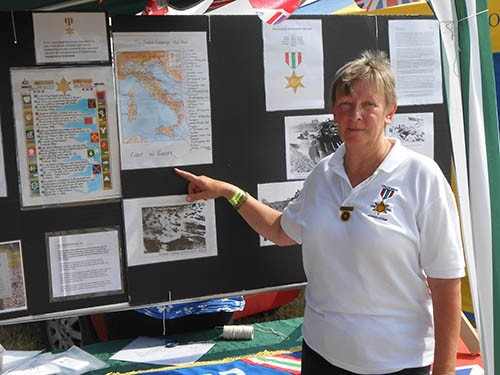 I would like to personally thank Suzanne, Robin and Vanessa for giving freely of their time to man the stand on behalf of the Association, as well as the ‘tankies’ for allowing us to attach ourselves to their plot. I believe it was a worthwhile venture, despite the heat and dust; our presence gave a good number of people something to think about and remember, and to be grateful that the sacrifices which were made, and the lives given, were not in vain because… WE DO REMEMBER THEM.