“The Alpine 44 Story” by Martin Urry

The Alpine 44 story written by Martin Urry son of the pilot of Liberator HK158 on which Anne Storms father was Bombaimer. Martin has kindly given us permission to use his article. Robin Hollamby ISA Website Editor.

The Alpine 44 Story by Martin Urry

By October 1944 the Allies had pushed the German forces north of the Gothic Line running from La Spezia in the west to Rimini in the east of Italy. SAAF 2 wing, consisting of 31 and 34 squadrons, and part of RAF 205 bomber group under Maj. Gen. Jimmy Durrant, based in Southern Italy near Foggia, was tasked with a supply dropping mission to the Partisans operating in the Po Valley north of Genoa. Four drop zones were selected, code named Morris, Dodge, Parrot and Chrysler, with 5 Liberators assigned to each. Weather conditions during the beginning of October were terrible, but the forecast for the night of the 12th was for a break, and the mission was given the go-ahead. The aircraft took off at regular intervals from about 16hOO hours, the flights would be about 8 hours, and they would be back at around midnight. At the briefing the crews were told to return to base if they hit bad weather. 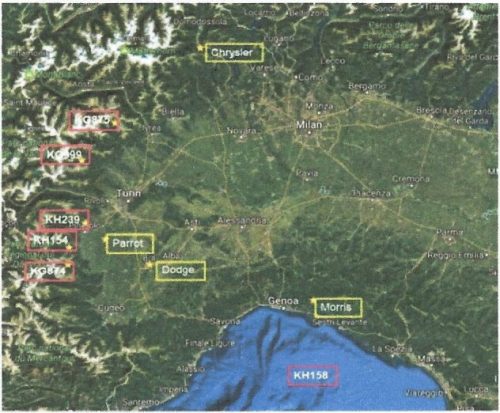 The flights encountered persistent, heavy rain, low cloud, and frequent flashes of lightning. Eleven aircraft turned around, only three found their target, and six aircraft failed to return, with the loss of 48 men. The meteorologists had forecast a westerly wind, but, unbeknown to all, the wind was now blowing from the east, resulting in the aircraft being roughly 60 km west of where they should have been, with disastrous consequences. Five aircraft crashed into the Alps and one, KH158, is missing to this day, presumed to have ditched in the Ligurian Sea off Genoa.

The local villagers had always known of the aircraft that had crashed nearby, and in 1999 the mayor of Ostana, the village below the crash site of flight KG874, decided to honour the airmen who had died that night.

They first contacted the United States Air Force, but were told that the aircraft must have belonged to the Royal Air Force. Enquiries here led them to the South African Air Force, and notices were placed in our newspapers and on the internet looking for the families of the crew. Contact was made with Barbara Brownrigg, sister of Bobby Whitelaw, crew member on flight KG874. Barbara and her husband, Glenn, attended the memorial service on 1 October 2000, when a plaque was laid on the crash site as well as on the Town Hall.

In July 2002, the village of Ala di Stura, 53 km North West of Turin, held a similar commemoration service to honour the crew of KG999, the pilot was 21-year-old Lt. Charlie Nel of Oudtshoorn. This was attended by Charles Nel, nephew of Lt. Nel, and his wife Helen, also Martin and Jean Urry, and a plaque was again laid on the crash site.

In 2011, a plaque was laid above the village of Neirone, to the North West of Genoa, in memory of the crew of KRI58. This was the Morris drop zone, as this plane has not been found it was deemed appropriate to honour these men here. The ceremony was attended by Anne and Roy Storm and their sons; Anne is the daughter of F/O Bob Millar, also Martin Urry, nephew of the pilot, Maj. Selwyn Urry, and his wife Jean.

In 2013, a commemoration service was held at the village of Pianetto near Valprato Soana, below the crash site of KG875, attended by Charles Nel, Martin and Jean Urry, Anne and Roy Storm, and relatives of crew member George Anstee from the UK. The monument consists of a granite block to which is affixed the wheel strut of the Liberator, found the previous year in a valley below the crash site. 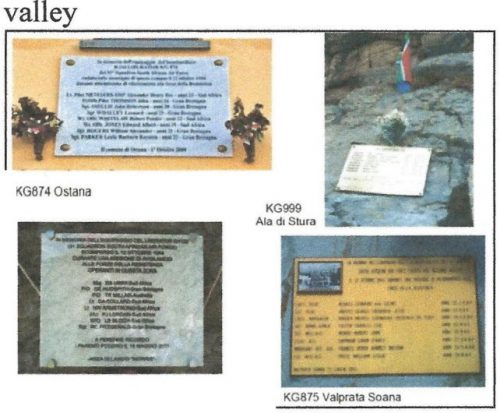 Services have also been held annually at the SAAF memorial at Bays’ Hill, Pretoria, on the closest Sunday to 12th October. These have been well attended by family members and friends, members of SAAF and SAAF A, the local chapters of the Alpini and the Carabinieri, representatives of the Zonderwater Block, also the Warsaw Flights family. 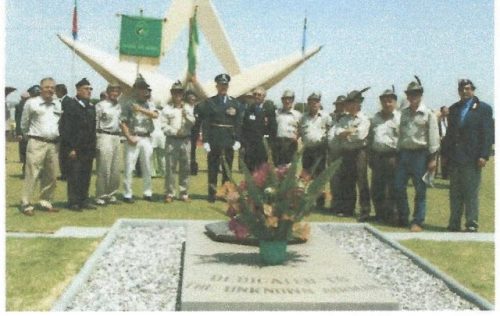