The Monuments Project by Phillipa Remhof and Julia Boix

We often get requests for help, mostly from second and third generations from our veterans seeking help finding service records, or headstones of relatives. We help where we can and point people in what we hope is the right direction to find what they seek.

In early June we received a request for help which was a bit more unusual, coming from two students from The Hafen City University of Hamburg, Germany studying for their Architecture Master’s Degree.  Robin Hollamby National Vice-Chairman.

“My name is Philippa Remhof, and I have been working with Júlia Boix on a project called Monuments. We are students in the HafenCity University of Hamburg Germany, in Architecture Master. For our main project we chose the Mahnmal für die opere der Zwangsarbeit.
This monument was created for the Forced labour workers during Second World War in the Hamburg Wasser Company. We are trying to find where they came from and where they were staying. Mostly of the names we have are Italians former Militaries, and we only have names and the cities where they came from. There is no much information about them, neither where they stayed (we came across with the possibility of staying in one of the satellite camps of Neuengamme, Fuhlsbüttel but this sounds unlikely).
We have been in contact to try to check with Cemetery Öjendorf if there is any record of them.
We would like to know if there is any information that could be provided by us, if there are any records or archives and if we can have access to them. Anything that could assure them of the Italian former forced labour workers’ identities.
Philippa Remhof, and Júlia Boix”

After my initial reply I received the following replies from Phillipa.

“Dear Mr. Hollamby,
Thank you so much for the e-mail! It really motivated us knowing there might be more people interested in a research that started from nothing.
We are students from Architect Master, and when we chose our main project we got the Monuments subject. We started studying different monuments in the city of Hamburg and this monument for the forced labour workers form the Hamburg Water came to us. It was more like an order for an intervention, and for it, we needed to know more about the workers. When we started the research, every step we got further it felt like more lost, there are not much records, and seems like there is no way to prove the identities of this workers.
For us, as architects working on monument, it felt like we should individualize each victim, and create almost profiles and not deal with it as group of names.

Hasn’t been easy at all, we have been in contact with the main concentration camp of Hamburg, Neuengamme, and they have been really helpful trying to help us to understand in which satellite camp they might have stayed. We have found out they were Italian Military Internees, what gave us de idea to contact associations of Italian Veterans from the WWII.
In other way, we are trying to keep on track by the records of the military appliance. We found there is a huge record since late 19th century, from each province in Italy, and we thought since we have the cities where they came from, could be a different approach.
Dr. Möller from Neuengamme gave us the idea of looking into Russian records too, because they are all online, but till now no sign of proof.
It is really easy to lose the motivation, even when we have our final presentation in two weeks. We know that our work will hardly get an answer in two weeks, but we would like to be the start for someone else’s work. Even if we get a small hint, probably someone will pick it up and look it deeper, and with proper ways.
Our idea was to let the family members know that there is a monument, created in 2016 for this workers. Their work was not forgot, and they are recognized.
I apologise if somehow this is naive of us to believe in something so big, or trying to touch in something that represents such a dark time of the history, that we can’t understand at all.
We would like to know also how could be the best ways to approach this.
In meetings between the two of us, we talked about creating and webpage and trying to get to local newspapers in Italy, trying to change the approach, give the information that we are looking for the family members and let them contact us if they want. But we are not sure if this a sensible way to do it, because this appeared in our lives two months ago, but for this families, this is part of their own history. As I said, we don’t know how naive of us it could be. We believe that is something good letting them know about the monument, but at the same time we don’t know how to approach it.
If you have any thought on this it would be really nice, or if you know someone that could help us would be amazing.
Once again,
Thank you so much for the answer, any help we can get is more than welcomed!
Best regards,
Philippa Remhof and Júlia Boix”

Sorry for the late answer, I tried to finish my research in the Italian Ministero della Difesa banca Dati dei Caduti e Dispersi della 1ª e 2ª Guerra Mondiale. We could find some names matching there, but the cities not, so we decided to compare the towns and where they are located, and we have 4 matches that there is a high probability of being the same person, due to the proximity – less than 15km- and it could be born in one and register in the bigger one, or the opposite. We are now trying to cross information with the data of the Forced Labour Compensation Program, because they ran our list too and got some matches but different towns and they need the birthdate to prove it. Since we know Hamburg Wasser Company was not involved in the payment of this compensation, if they are in the data it might mean that they are not the person that we are looking for, or the workers were not working in Hamburg Wasser (this fact was never proved and we want to check it too).
We have been working on the abstract too and as soon we have it we will send it to you, with the pictures of the monument.
Hope we will hear something about the other contacts you connected. Right now this is how further we got. We are not sure if it is something but at least gave us a new direction to go. We are still waiting for Öjendorf cemetery to check if any of our former workers are buried there.
Best regards,
Philippa Remhof and Júlia Boix”

The exhibition will be taking part in Hochschule für Angewandte Wissenschaften Hamburg Department Design, from 12th of July till 14th of July 2018, and later, from 7th till 9th of September will be an exhibition included in the European Heritage Days 2018 Hamburg.

“Dear Robin.
Sorry for the long silence, we had a lot of work to do in the past days and now we are so close to the exhibition.
We are still looking for pictures from our own mans to use in our exhibition, but it hasn’t been easy to find. At least from this time in Hamburg. But we were succeeded on finding old maps from Hamburg. (Curiosity, our interest for old maps started with Dr. Möller from Neuengamme concentration Camp, he has one old map from the British army, from Hamburg, and with the diaries he has he can now read the coordinates on the map and find where were they planning. Is quite amazing!).
As promised, attached will be pictures of the monument and our abstract of the work. Let me know if we should write too more specific our intention , in a more direct way.
Hope to hear from you soon,
Best regards,
Julia Boix – Philippa Remhof”

The On-going Project
After Fascist Italy resigned from the alliance with Nazi Germany the on 8th of October 1943, the Wehrmacht captured around 650,000 Italian soldiers and officers considered as traitors and deported them to the German Reich and the occupied territories. From 1943 to 1945, many Italians were forced into forced labour in camps in Germany; the Nazi regime wanted to exploit the labour of the Italians-prisoners of war declared to be military internees. Many of these Italians were placed in concentration camps and lived under terrible conditions; hunger, disease and violence shaped the daily lives of the prisoners and many of them were hurt to death.
During the World War II, Hamburg had approximately 500,000 forced labourers from which around 50,000 were deported Italian militaries. They were accommodated in approximately 1,300 camps spread throughout the city, and used in about 1,000 companies in Hamburg from all economy sectors and employed in countless households and farms as well.

We got the assignment of creating an intervention in the monument ‘Mahnmal fur die Opfer der Zwangsarbeit’ from Forum Wasserkunst at Kaltehofe. After thinking of a new design, we noticed that the research realized until now was incomplete no evidence or proof of the 139 forced labours names was registered. For we have tried to establish a proper research which would give a reliable meaning to the monument in order to renovate the existing one and be able to refer to it as an individual memorial for each victim instead of a common one. By getting in contact with various associations and companies from all over Europe we have found reliable connections between official archived files and the names written in the monument a new conducted research has been made and the transformation of the existing monument has become possible.

This is the full list of the names on the memorial. 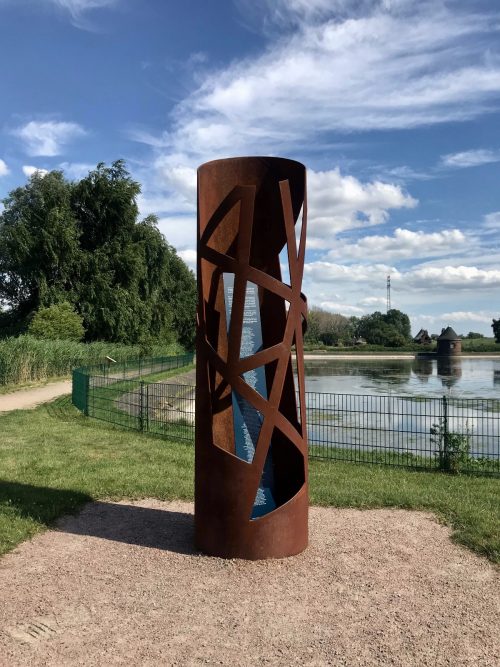