A grey and windy morning greeted my family and I as we headed for the train into London. We met up with the thousands of veterans, families of veterans, and supporting charity organisations on Horse Guards Parade, who were preparing for another homage to fallen and present-day veterans, alongside members of the Royal family, Government, Commonwealth, and European-nation representatives.

It appeared to me that there were many more Associations than previously, representing every facet of past conflicts. The atmosphere was warm, friendly and the camaraderie was palpable.

Our contingent of 27 was blessed to have three veterans on our ‘front line’; Colonel David Blum, Tony Roper from Devon (attending for the first time) and Jack Andrew from Sheffield – their combined ages being 278!

After the marshals were satisfied on the column format, we were guided through the famous archway, leading on to a crowded Whitehall. The service began with the gun salute and two minutes silence, followed by the Last Post and laying of official wreaths. There were prayers to honour the memory of those who died serving their country and Crown, together with a hymn and ending with God Save the Queen.

The march then began with the Royal Welsh Guards band playing a selection of well-known tunes which would have been sung when possible, by the WWII veterans. Each contingent handed in their wreaths as they passed the Cenotaph. The crowds of onlookers were amazing all around the route, clapping and praising the veterans; it was such a privilege to be alongside some of them and representing those who would have loved to be with us. I was very proud that my daughter, son in law and their two children could join me on this occasion, in memory of their Grandpa and Great Grandpa (respectively). My son-in-law is a serving member in the Army and is himself a veteran of campaigns in Iraq and Afghanistan, and elsewhere.

As our march brought us back to Horse Guards Parade, the salute this year, was taken by HRH Duke of Cambridge, standing alongside the RBL’s president. 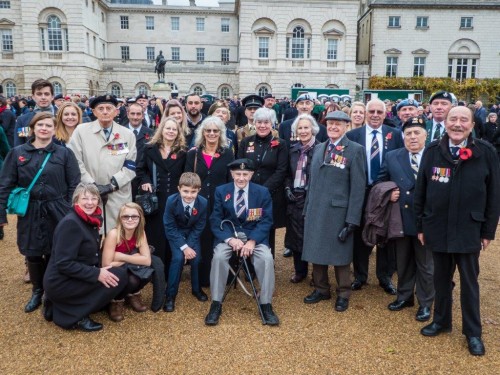 On returning home, we were contacted by family and other members, saying that the commentary on BBC coverage had mentioned the Association and there are some lovely pictures of our contingent which you can see through iPlayer catch-up. This coverage has also sparked interest with several more people wanting to know if we can help trace their relatives who fought in Italy. So there is still work to be done!

Thank you to all who were able to make the journey and march; our forebears would be happy to know we will never forget the sacrifice they made.