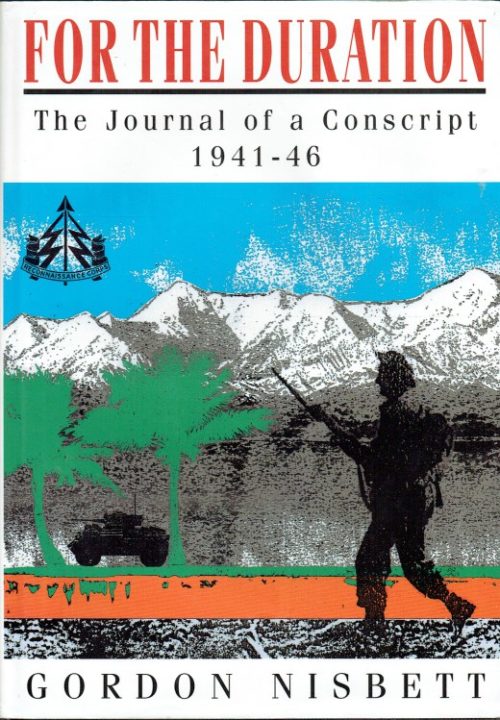 Nisbett was quite surprised when the army called him up. He was bespeticaled and short but the army deemed him suitable for combat duties and he duly fought in Tunisia and Italy. While Nisbett served with a Recon regiment he found that his job was pretty much the same as a standard infantryman.

Nisbett writes a bit more on training than most British memoirists. It was jarringly cold and dangerous. It seemed more spartan than that experienced by US troops but also more practical, with less of the endless drill. Nisbett is then assigned to 1st Reconnaissance Regiment (of 1st Infantry Division) and more training before they are all shipped overseas for action in Tunisia. The Reconnaissance Regiment were war-time creations, raised to allow the historic cavalry regiments to convert to tanks. They were equipped with armoured cars and Bren carriers which were markedly inferior to German weapons. This is sheeted home in Tunisia where the regiment has some grim days. Nisbett conveys well the tragedy of this, especially as the land fought over was of so little actual importance to anyone.

While there are some notable encounters early, the highlight of Nisbett’s account is his lengthy stint at Anzio. Despite the high hopes for a drive to Rome, the Allies are contained and forced to endure trench warfare for months. Nisbett’s unit largely for-goes its reconnaissance duties and serves in the frontline next to the infantry. There are many night patrols and endless shelling. There are German attacks and Nisbett is fortunate to miss the destruction of his troop.

Following Anzio the division slogs its way up Italy. There is a little more reconnaissance action but due to the terrain it is mostly done on foot. The mountain winter is very difficult. The action is mostly in the form of patrols and setting ambushes, though the Germans are not encountered too often. When the division is finally given a break it is assigned to Palestine, which was welcome in many ways. Nisbett loves the Biblical history and is almost a pilgrim. This changes for the worse with the end of the war and the discontent that breaks out in the Holy Land. It also signals the end of the regiment and Nisbett returns a vastly different person to an England he doesn’t recognize.

Nisbett is a likeable fellow and his writing is quite engaging. Though he is in the front line continually and sees lots of violence it is not a `blood-n-guts’ account. Friends are killed but Nisbett’s personal contribution to returning fire is subdued. Nominally a radio man, he is assigned a variety of weapons (Bren, Piat) but he doesn’t write of firing them to any real degree. Still, it is a far ranging account of an ordinary man at war. It is also the only account I am aware of by a member of a standard recon regiment (though there are a couple by men who served in tank recon regiments), so it has some different elements to other wartime memoirs.