Beyond the Wire: A True Story of Allied POWs in Italy 1943-1945 by Malcolm Edward Tudor 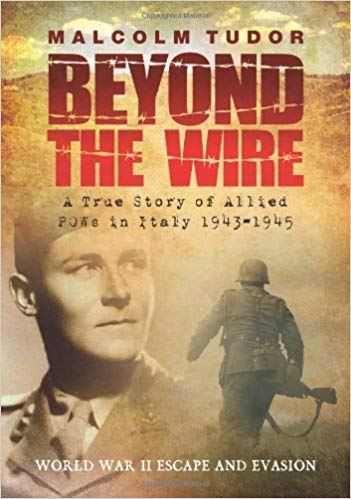 To go beyond the wire was to leave the camp in which prisoners of war had been held for days, months or years.
This book tells the inside story of the greatest prisoner of war escape in wartime Italy.
On 9 September 1943 over five hundred British and Allied officers and men marched out of camp 49 at Fontanellato,
just ahead of a German column sent to take over the camp. Among the brave Italians who helped the escapers were the author’s mother and grandparents.
On the horizon of the camp there should have been advancing Allied troops. Planners in London said that there would be and issued a stay put order. Instead, there were only Germans and Fascists. The escapers had to choose the right road to get them home. The wrong one meant recapture and a journey in a sealed railway cattle truck to a prison camp in Germany.
Fortunately, a secret army of civilians and members of the Resistance came forward to help the fugitives. As a result, many escapers were able to cross to Switzerland or to reach Allied forces within Italy.
These are the chapters:
Prisoners of War in Italy.
The Camp.
Hopes of Freedom.
The 45 Days.
The Mass Escape.
Every Man for Himself.
Through Enemy Lines.
Secret Journey.
From Occupation to Liberation.
After the War.
‘Beyond the Wire’ is based upon interviews with former prisoners of war, civilian helpers and members of the Resistance, together with the extensive use of declassified documents, and research in Britain and Italy.
The book is inspired by the author’s unique perspective as the son and grandson of Italian helpers to the British and Allied escaped prisoners of war.
Paperback – 9 Nov 2009
ISBN-13: 978-0953896455
by Malcolm Edward Tudor