RAF Liberator Over The Eastern Front by Jim Auton MBE 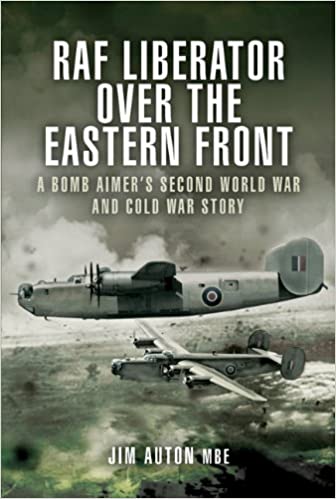 Jim Auton was posted to 178 Squadron who were operating ex-USAAF, war-weary Liberator heavy bombers. This squadron he was based in Foggia in Italy, living under canvas without the barest of military or personal necessities. The duration of a tour at that time was 40 front-line operations over such dangerous targets as Ploesti and the Danube – few in the squadron felt they could survive since the casualty rate was so high. Then came his part in the desperate attempts to supply the besieged city of Warsaw when the Liberators were ordered to fly in at 500 feet, at their lowest speed and with flaps and undercarriage down, to drop desperately needed ammunition and supplies. All this through a hail of both German and Russian gunfire. On his 37th sortie Jim, aged twenty, was severely wounded when he was hit by Flak whilst is in his bomb-aimer’s position in the aircraft’s nose.