From Taranto to Trieste by Jennifer Mallinson 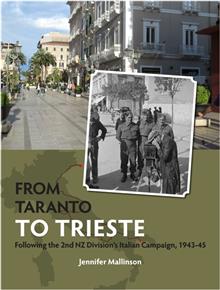 Taranto to Trieste is an account of the author’s fascinating journey to retrace the actual path of the 2nd New Zealand Division in Italy from its arrival in October 1943 until the end of the European war. Although a personal journey with personal reflections, the real story is about the largely off-the-beaten track places which the troops passed through, what they saw and experienced along the way and, in some cases what they missed. To complement the Division’s story, the historical context and military actions are explained with many maps as well as war-time photographs and colourful quotations from official military histories. As the author says, “There are many people of the post-war generation, and their children, with direct connections to the Italian campaign, who would like to know more about the small, mysterious places the Division passed through which appear in diaries, letters and on the back of photographs, but many of which do not appear on maps.” The author’s own photographs, descriptions of the places visited, the landscapes travelled and the roads followed will delight those wanting to follow in the footsteps of the 2nd Division in Italy.
Read less