The Chairman and Committee of the RBL South African Branch invited The Italy Star Association to attend their service in Richmond. Our National standard was to have been paraded too, but unfortunately, this was not possible. Colonel David Blum and I attended on behalf of the Association. The service honoured three key events:- the 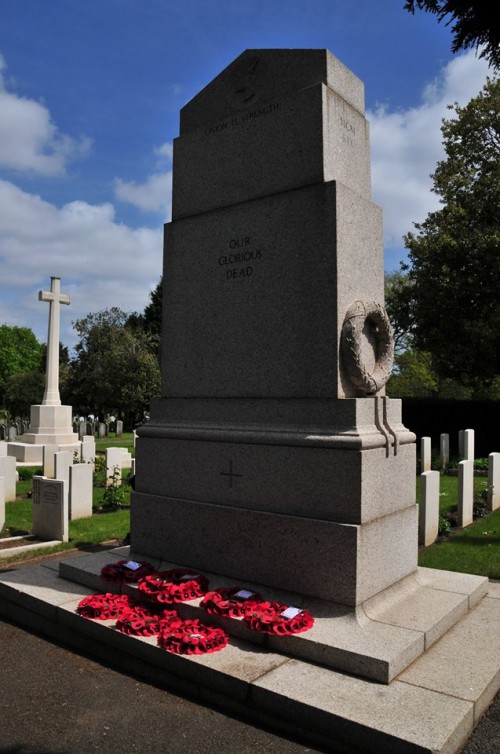 date being 70th anniversary of VE Day; the 71st anniversary of the end of the battle which secured Monte Cassino (a key factor in the liberation of Europe) and also, the dedication of its new branch standard.

The ceremony took place at East Sheen Chapel in Richmond cemetery. During the service we learnt of the significance of the South African cenotaph memorial’s presence in Richmond and why the RBL chose to dedicate its South African branch standard there. The memorial was designed by Edwin Lutyens and has similar lines to the Whitehall Cenotaph which he also created. (see photo)

The service was well attended and particular guests were the RBL Riders branch who added colour and style to the occasion (see photo). There were representatives and standards from other RBL branches, The Royal Naval Association, Fleet Air Arm Association, Submariners Association, South African Legion, members of the Memorable Order of Tin Hats and The Legion of Frontiersmen as well as the military attaché from New Zealand’s Defence Force were in attendance.

The Royal British Legion and South African Legion’s roots go back a long way; both extend to an inaugural meeting of the British Empi

re Services League (now the Royal Commonwealth Ex-Services League) held in Cape Town, South Africa on the 21st February 1921. The attendance of Field Marshal Earl Haig and General the Right Honourable Jan Smuts as founders of the BESL was no coincidence – both The RBL and its South African counterpart stem from this special relationship and vision shared by both men. In Richmond Park, a South African Military Hospital was established during World War I. Jan Smuts later inaugurated a South African Cenotaph in the cemetery located near the Hospital. This Cenotaph became the location for regular pilgrimages for South African veterans after the Second World War. Eventually the hospital was demolished but the memorial remains

During South Africa’s years of international isolation it fell into complete obscurity – both in the United Kingdom and South Africa. The monument and South Africa’s connection with Richmond were gradually forgotten about. The Royal British Legion South African Branch was able to re-establish the historic roots; re-dedicating its Cenotaph in November 2014. The South African National Defence Force were notified of the oversight and the monument is now listed as a significant South African Military Memorial. Buried in “soldier’s corner” next to the Cenotaph are South African servicemen who gave their lives to the liberation of Europe. It was apt that a new RBL Standard for a South African branch be dedicated at this location to their memory, and highly appropriate that it was done on the 70th anniversary of VE day. 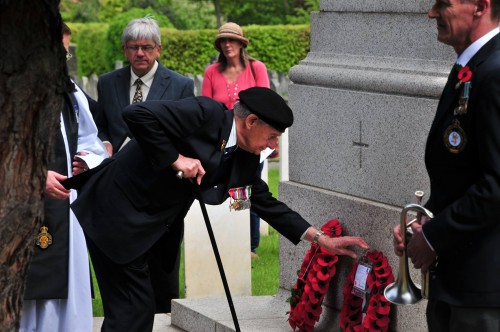 After the service there was a short parade up to the South African cenotaph for the act of remembrance, last post and reveille and the laying of wreaths. Colonel Blum laid the wreath on behalf of the Italy Star Association 1943-1945 (see photo).

Everyone then adjourned to the Twickenham RBL branch for a lovely lunch and refreshments. Both David and I enjoyed the day and were pleased to learn so much from the event. I shall endeavour to keep in touch with Peter Dicken (Chairman of RBL South African branch) in the hope that we can liaise at future events.